(Los Angeles, CA) - DENK gallery is pleased to announce Thaumaturgy, the gallery's first solo exhibition of new paintings by Los Angeles-based artist Helen Rebekah Garber. In her new body of work, Garber is in search of utopian alternatives to the dominant ideological landscape. In an attempt to visualize some form of cultural recourse and to present healing philosophical counterparts to the noxious tenets of the status quo, Garber has turned to figuration in a gesture towards embodied specificity. The proposition of her alternative civilization, in stark contrast to the current state of our own, is one predicated on life, maternal nurture, inclusivity, and collective interest rather than divisive conquest.

Garber's past works have explored visual abstractions as a vehicle for non-denominational spiritual themes. Distilling systems of meaning from a complex emblematic shorthand, she has channeled formal mark making as a sacred and redemptive practice of inference. Looking to ancient symbology as a source of inspiration, and drawing collective connections across different histories and cultures, her imagery has felt simultaneously ancestral and hieroglyphic while also idiosyncratic and singularly contemporary. The repeated patterns and motifs throughout her work suggest an interest in protolinguistic systems of meaning that transcend the mores of our own inherited languages.

Historically, abstraction has long held a connection to spiritualism and theosophy in art. Garber cites late nineteenth and early twentieth-century artists Hilma Af Klint, a Swedish artist and mystic whose spiritual abstraction predates Kandinsky's, and Emma Kunz, an artist and healer known for her sacred geometries, as influences, among others. These early proponents of abstraction among figures such as Wassily Kandinsky, Piet Mondrian, and Kazimir Malevich, sought a freedom from language and the existing visual vernaculars of the time to express an interest in mysticism and cosmic confluence. This new "formless" and transcendent expression emancipated the pictorial from figuration and objects, appealing to a more mutable set of visual possibilities in search of the discarnate.

In an early 1911 triptych by Mondrian, Evolution, the female body appears prominently as a symbol of spiritual exaltation and immateriality. Sharing some affinities with Garber's current depiction of the feminine, both exist somewhere between figuration and spiritual abstraction. Among her other influences are Marjorie Cameron, an early twentieth-century American artist with an interest in the occult and a penchant for surreal psychedelia, and American, Berlin-based artist Dorothy Iannone whose richly dense works explore themes such as female sexuality and "ecstatic unity," drawn from pan-cultural references to theology and mysticism.

In a self-conscious move away from this abstract spiritualism towards a more concretized set of representational depictions, Garber is forcing this relativism into an accountable set of literal rather than abstract forms. The life-giving female body appears throughout as an extended metaphor for this alternative society, a symbolic refuge from the violence and trauma of our own. Formally lush, sensual, ornate and vibrant, these deliberately seductive images present women as guardians and sentinels in this first iteration and ongoing evolution of Garber's utopia. Referencing historical depictions of deities from early fertile crescent civilizations, and constructing an experimental ideography and diagrammatic language from existing sources to encode within the work, Garber seeks a sacred human continuity and primordial spark in the re-visitation of ancient archetypes.

As the title suggests, Garber is invoking a utopia built in total opposition to our current sociopolitical condition: a society of generative, life-giving, miracle workers, where the miraculous work of supporting life trumps the compulsion to ruin and consume.

Helen Rebekah Garber completed a B.F.A at the California Institute of the Arts. She has shown extensively throughout the United States in both solo and group exhibitions, and has exhibited internationally.

Her work is included in the West Collection, and has been acquired by several high-profile private collections. 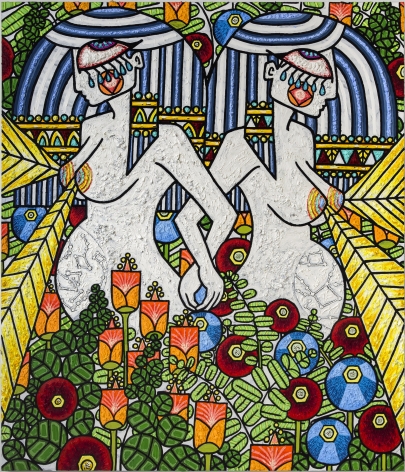